The Metropolitan Museum of Art (colloquially The Met) is an art museum on the eastern edge of Central Park, along “Museum Mile” in New York City, United States. Its permanent collection contains more than two million works of art, divided into nineteen curatorial departments. The main building, often called “the Met”, is one of the world’s largest art galleries; there is also a much smaller second location, at “The Cloisters”, in Upper Manhattan, which features medieval art. Represented in the permanent collection are works of art from classical antiquity and Ancient Egypt, paintings and sculptures from nearly all the European masters, and an extensive collection of American and modern art. The Met also maintains extensive holdings of African, Asian, Oceanic, Byzantine, and Islamic art. The museum is also home to encyclopedic collections of musical instruments, costumes and accessories, and antique weapons and armor from around the world. Several notable interiors, ranging from 1st-century Rome through modern American design, are permanently installed in the Met’s galleries. The Metropolitan Museum of Art was founded in 1870 by a group of American citizens. The founders included businessmen and financiers, as well as leading artists and thinkers of the day, who wanted to open a museum to bring art and art education to the American people. It opened on February 20, 1872, and was originally located at 681 Fifth Avenue. As of 2007, the Met measures almost 1/4-mile (400 m) long and occupies more than 2,000,000 square feet (190,000 m).

The Philadelphia Museum of Art is considered one of the top museums in the United States, with more than 800,000 visits every year. It is also one of the largest museums in the country housing a collection of over 225,000 objects and over 200 galleries spanning 2000 years. It also has up to 20 special exhibitions every year. The Philadelphia Museum of Art was established in 1876 during the year of the Centennial Exposition, it was never planned to grow to this massive size. It was originally called the Pennsylvania Museum and School of Industrial Art and was housed in Fairmount Park’s Memorial Hall. The present building was built from 1919 to 1928 in a quasi-Greek Revival design, some refer to it as the Parthenon on the Parkway.

The Louvre Museum (Muse du Louvre) or simply the Louvre is one of the world’s largest museums, the most visited art museum in the world and a historic monument. A central landmark of Paris, it is located on the Right Bank of the Seine in the 1st aggrandisement (district). Nearly 35,000 objects from prehistory to the 19th century are exhibited over an area of 60,600 square metres (652,300 square feet). The museum is housed in the Louvre Palace (Palais du Louvre) which began as a fortress built in the late 12th century under Philip II. Remnants of the fortress are visible in the basement of the museum. The building was extended many times to form the present Louvre Palace.

The National Gallery of Australia is the national art gallery of Australia, holding more than 120,000 works of art. It was established in 1967 by the Australian government as a national public art gallery. Tom Roberts, a famous Australian painter, had lobbied various Australian prime ministers, starting with the first, Edmund Barton. Prime Minister Andrew Fisher accepted the idea in 1910, and the following year Parliament established a bipartisan committee of six political leaders‚the Historic Memorials Committee. The Committee decided that the government should collect portraits of Australian governors-general, parliamentary leaders and the principal “fathers” of federation to be painted by Australian artists. This led to the establishment of what became known as the Commonwealth Art Advisory Board (CAAB), which was responsible for art acquisitions until 1973. Nevertheless, the Parliamentary Library Committee also collected paintings for the Australian collections of the Commonwealth Parliamentary Library, including landscapes, notably the acquisition of Tom Roberts’ Allegro con brio, Bourke St West in 1918. Prior to the opening of the Gallery these paintings were displayed around Parliament House, in Commonwealth offices, including diplomatic missions overseas, and State Galleries.

Situated in the Company Garden, the Iziko South African Museum was founded in 1825 and is one of South Africa’s National Museums. The museum’s collection includes 250 million year old mammal-like reptile (therapsids) fossils from the Karoo. The Iziko South African Museum is separated into four levels each displaying different exhibitions. The Ground level includes 250 million year old mammal-like reptile fossils, collection of whale skeletons and artifacts from the Nguni and Sotho people and more. The rest of the levels are about biology, the history of the museum and more.

The Tretyakov Gallery, also known as State Tretyakov Gallery, is one of the greatest museums in the world. It houses an more than 130,000 collections of Russian art and artifacts ranging from the 11th to the early 20th century. The Tretyakov Gallery was established in 1856 when the wealthy merchant, Pavel Mikhailovich Tretyakov purchased Nikolai Schilder’s painting The Temptation. He continued purchasing more paintings. In 1892, Pavel Tretyakov donated the approximately 2,000 paintings to the city of Moscow.

The National Gallery of Canada (French: Muse des beaux arts du Canada), located in the capital city Ottawa, Ontario, is one of Canada’s premier art galleries. The Gallery is now housed in a glass and granite building on Sussex Drive with a notable view of the Canadian Parliament buildings on Parliament Hill. The acclaimed structure was designed by Moshe Safdie and opened in 1988. The Gallery’s former director Jean Sutherland Boggs was chosen especially by Prime Minister Pierre Trudeau to oversee construction of the national gallery and museums. Marc Mayer was named the museum’s director, succeeding Pierre Thberge, on 19 January 2009. The Gallery was first formed in 1880 by Canada’s Governor General John Douglas Sutherland Campbell, 9th Duke of Argyll, and, in 1882, moved into its first home on Parliament Hill in the same building as the Supreme Court. In 1911, the Gallery moved to the Victoria Memorial Museum, now the home of the Canadian Museum of Nature. In 1913, the first National Gallery Act was passed outlining the Gallery’s mandate and resources. In 1962, the Gallery moved to the Lorne Building site, a rather nondescript office building on Elgin Street. Adjacent to the British High Commission, the building now serves as office space for various governments departments, especially the Department of National Defence. It moved into its current building on Sussex Drive in 1988, beside Nepean Point. 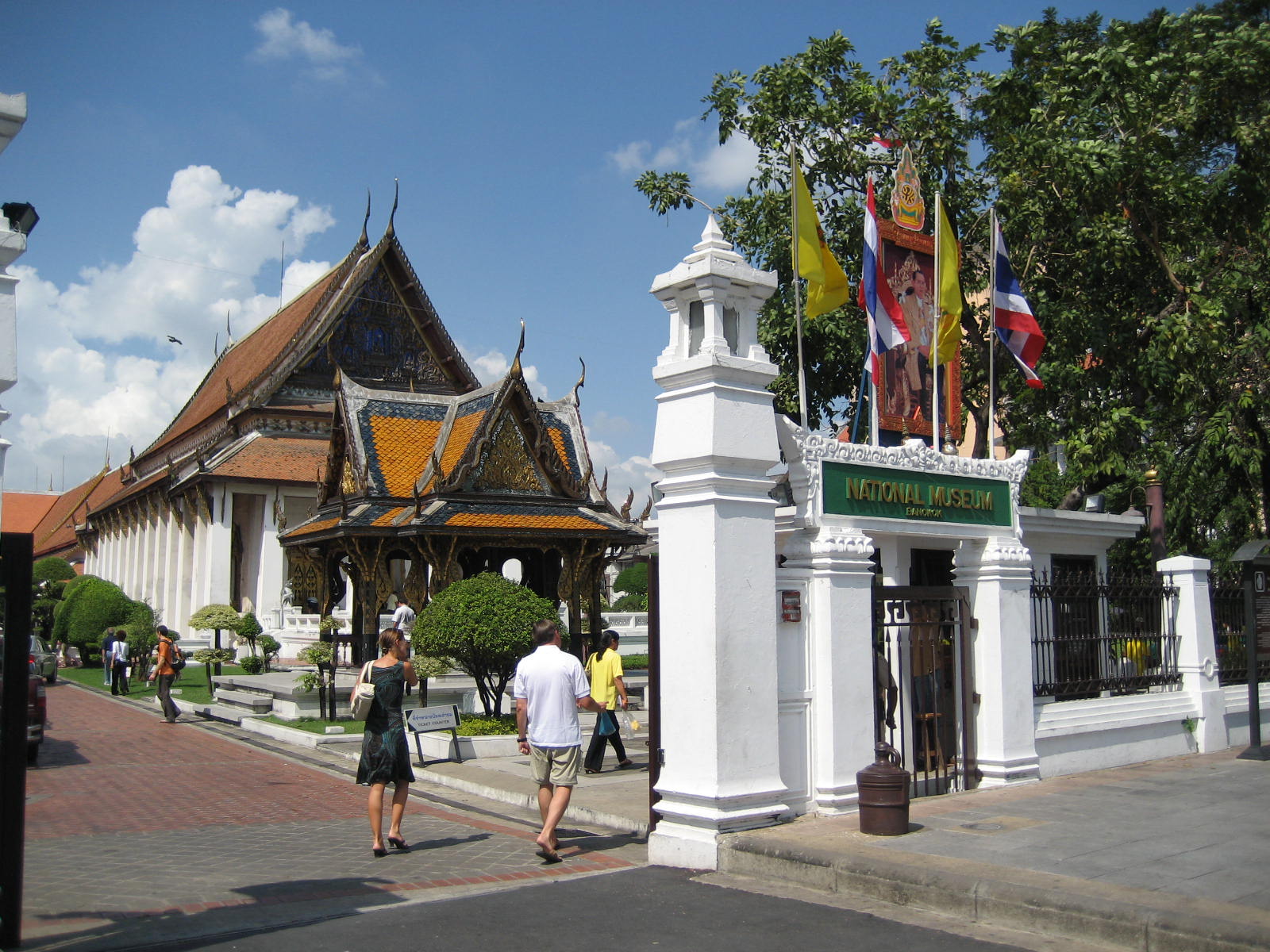 The Bangkok National Museum dates back to 1874, in 1926 it was renamed to Bangkok Museum. The Museum houses the largest collection of Thai art and artifacts in the country. The museum is comprised of six buildings in which one of them is the Buddhaisawan Chapel, which was built in 1787. The Buddhaisawan Chapel is well known for housing the revered Buddha image, the Phra Buddha Sihing. There is also the Sivamokhapiman Hall which houses the galleries of Thai history and prehistory, it also houses the famous Inscription No. 1 from the Sukhothai era which was written by the great King Ramkhamhaeng. The museum provides tours which are done in English, German, French and Japanese.

The National Museum of Australia was established in 1980. The building of the museum was completed in 2001. The zigzag pattern of the museum is said to represent the tangled story of Australia, the design was done by the architect Howard Raggatt. The National Museum of Australia holds the world’s largest collection of Aboriginal bark paintings and stone tools. It was named Australia’s best tourist attraction for 2005 and 2006. The museum was slightly damaged in 2006 during a storm, only the roof was damaged and none of its collections were affected.